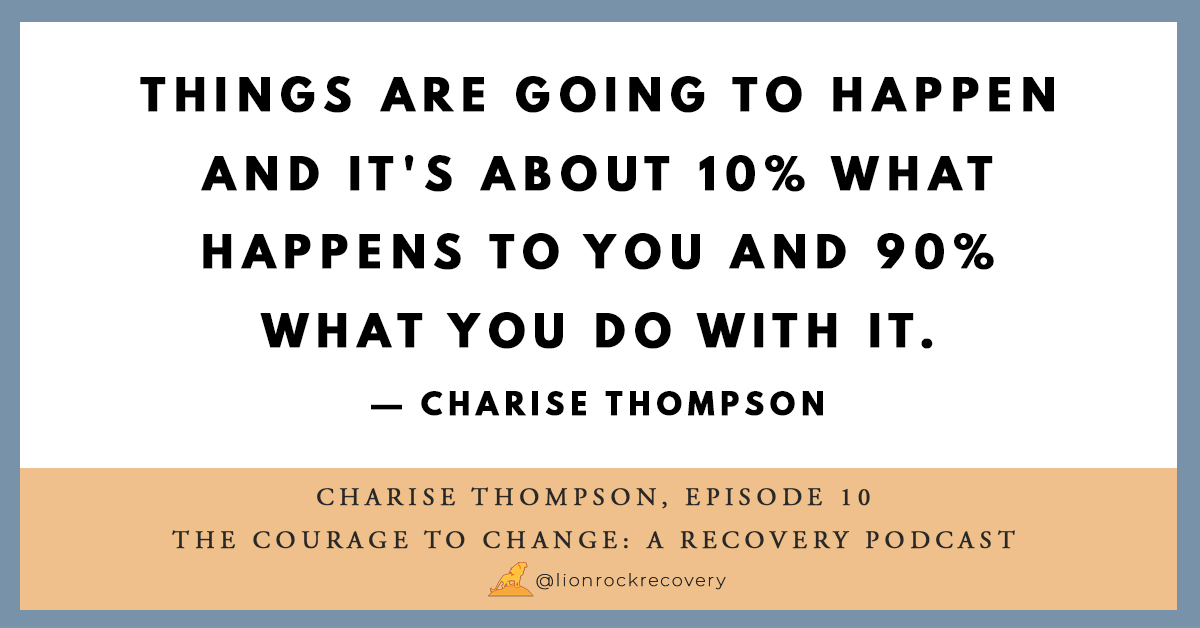 Charise Thompson shares her incredible story of strength and determination after enduring sexual assault, illness, 13 years in a wheelchair, and other trauma with host Ashley Loeb Blassingame on Episode 10 of The Courage to Change: A Recovery Podcast.  She is a Victim Advocate and a Support Group Facilitator for both people with Hepatitis C and survivors of sexual assault. She is also a women’s roller derby league coordinator and coach. Previously, Charise was an Administrator for a drug and alcohol treatment facility and Victim Advocate for Safehouse Sexual Assault Services.

Ashley discovered Charise after her story was reported in the UK newspaper The Sun. We have edited her interview for a fast read, and encourage you to listen to Charise’s full story on the podcast.

Charise was raised in a home where she and her siblings were brutalized by an alcoholic father who, according to Charise, “taught you everything you never wanted to be in life.” From early on she was told that “that you’ll never be anything, you’ll never amount to anything.” Determined not to let this verbal abuse become a self-fulfilling prophecy, Charise left home at 17 and moved to Texas for a fresh start.

In Texas she quickly met her first husband and got married at 18. She became pregnant quickly and her husband had their son James when Charise was 19. Determined to give her son a better, safer upbringing than the one she had, she left their home after a traumatizing incident with her husband.

She describes her decision to leave as definitive: “I had grown up in a house where the kids were brutalized and nobody was ever going to lay a hand on my son. My husband, at that time, got drunk one night and put his hands on my baby and that was the end. I was packed and gone before he got home from work the next day. So, then it was just my son and I for seven years.”

When James was four years old, Charise was attacked by a group of men in what the police called “a sadistic gang-rape.”

While driving from Laredo to Corpus Christi where her mother lived, Charise’s tire blew out. She got out of the car, locked it, and changed her tire. While she was tightening the lug nuts, a white Ford pickup pulled up behind her, and one of the men in the car offered to help. Charise thanked the man, declining any help since she was almost finished. Suddenly, the man pulled a gun on Charise and stuffed her into the back of the truck, where there were five other men, and the truck drove away.

Charise says she is thankful that the men drove the truck away so that her son didn’t see anything: driving away is “one thing I am eternally grateful for, because my son didn’t witness” any of the assault.

Charise describes the harrowing assault in detail to Ashley in the podcast. We’ve abbreviated it here.

“They drove what seemed like forever. I have no idea of direction or time. They’re beating on my head and kicking me and stomping me and told me it was the last day I was ever going to have on earth. They stopped. I had no idea where we were. They pulled me out of the truck. For the next few hours, they beat me, they tortured me. They pulled out a portable drill and tried to drill holes in my ankles.

“They had the device that you hang game from to dry after you’ve skinned it and the intention was to get that through my ankles and hang me like wild game. But they couldn’t get the drill through my ankle bones, though they did try in both ankles. They tied me to the back of the truck and drug me for a while. They ran over me with the truck. There’s not too much that you can imagine that they didn’t do. They beat me with a tire iron when they couldn’t rape me anymore. They used the tire iron and, at the end, they picked me up and they threw me into a drainage ditch. The last thing he said was, ‘She’s dead,’ and they thought I was.”

Charise laid on the ground for a long time, and then, driven by her overwhelming desire to get back to her son, started to move. Even though her legs and arms were broken, she crawled for hours to get help. Finally she reached a small ranch house. The ranch hand ran to the main house, where the ranch owners quickly called the police. Charise was taken to the hospital, where even through incredible pain, she worried most about James.

“I had multiple skull fractures and other broken bones and about half my teeth were either knocked out or broken off, and my insides were kind of hanging out where they’re not supposed to be. I had knife wounds. I had a cut that went from my cheekbone all the way down to my jaw,” shares Charise. “And I remember feeling the most relief I have ever felt in my life [when they told me] that [James] was okay.”

James was with good friends Judy and Rufus, who ended up caring for the toddler for the four months Charise was in the hospital, and for the time that she stayed in patient rehab after that.

Recovering from these horrific injuries was a painful and long process. Throughout all of it, Charise was driven by being there for her son,  James. She shares:

“The attack was painful in every sense of the word, but I think, actually, the recovery was more painful. It just never ended. Learning to walk, learning to feed myself. All these things all over again and I didn’t know where life was going to take me. But I knew I was going to be a mother and that’s all that really mattered. I was going to be there for my son. By now, I’m through the danger zone and it’s a pretty safe bet [I’m] going to live, it’s just what kind of disabilities [I’m] going to have along the way. As long as I could be a mother, I was good.”

Healing Through Helping Others

Charise and James moved to Corpus Christi where Charise started going to a crisis center because she “needed help, and [she] knew [she] needed some help. She entered the crisis center’s treatment and training program and then started working with the other women in the program, where she feels her real recovery began.

“It was after I had been there for a while and went through their training program and started working with other women that I found my healing. It was not so much the therapy, the counseling, the understanding, the process that I had gone through. I was being able to use my story to help somebody else. To say, there is life after rape. There is life after sexual assault.”

A few years later, Charise became sick with a seemingly mysterious illness that multiple doctors could not diagnose. Ultimately she was diagnosed with Hepatitis C, which she contracted during blood transfusions in the hospital after the attack. Of 31 units of blood she received, 11 were contaminated with Hepatitis C. Charise entered into the first human trials for Interferon to treat her illness. The trial protocol required a 30-day hospital stay and then frequent home-administered treatments once she was home for six months. It was long and particularly brutal, because unbeknownst to doctors and researchers, Charise’s genotype renders interferon ineffective in treating her.

During the treatment Charise had many mini strokes, and then six months after her Interferon treatment was over, she had a massive stroke. She was unable to walk, talk, or do anything. She describes her state to Ashley in the podcast:

Charise was in a wheelchair for 13 years and was told she would never walk again.

At her lowest point after four years in the wheelchair she almost committed suicide, which she describes in great detail to Ashley in the interview.

“I’d been in a wheelchair for, I think, about four years and it was just so overwhelming,  all of the things that I couldn’t do. My life virtually ended, and I had been depressed. I had been going to the doctors and they had me on all these meds. I understand meds can help in a lot of situations, but they just kept piling on more meds and more meds and more meds until I couldn’t think, I couldn’t function. So, I had quit taking everything, which is never a good idea. I went into this deep, dark depression. One day, while I was [in the house] by myself, I wheeled my wheelchair into the bedroom and I got out of the wheelchair and, on my hands and knees, got into the closet. I got my gun and I got back into the wheelchair and I wheeled into the bathroom. I got into the shower stall and closed the door, sat down on the floor and put the gun to my head, because I truly believed at that moment that it would be easier for everybody.

In all of her work, Charise encounters women who abuse alcohol and drugs to cope with their trauma. She explains:

“It is a coping skill and, until you learn other coping skills, that’s all you have. Whether its popping a few pills to make the pain go away, or having a couple of drinks just to make the world go away for a little while, that is a coping skill. Children learn what they live and, if you didn’t grow up in an environment where you learn coping skills and learned how to deal and learned how to cope, you have to learn it somewhere. Until you learn those skills and find a way for them to take the place of the pills or the alcohol, or whatever you’re using to make yourself feel better, you’re not going to grow.”

She feels so fortunate that her husband has supported her through the fallout of her attack and everything that has happened in her life. That and other insights have helped her not just cope but overcome.

“Chris said it’s not my fault,” explains Charise.  “Second, things are going to happen and it’s about 10% what happens to you and 90% what you do with it. To me, that is huge. It’s all about you and the person that you want to be, because life is growth. We never stop growing. If we do, we start stagnating and stinking. Life is a process and growth is a process and you get out of it what you put into it. You can’t sit back and go to one therapy session and say, “Well, jeez, I did what I could. Now I’m stuck in this place.” You chose to leave yourself in that place and you’re the only person that can pull yourself up by the bootstraps and choose to go to a different place.”

Most of all in her work, Charise shares her story. 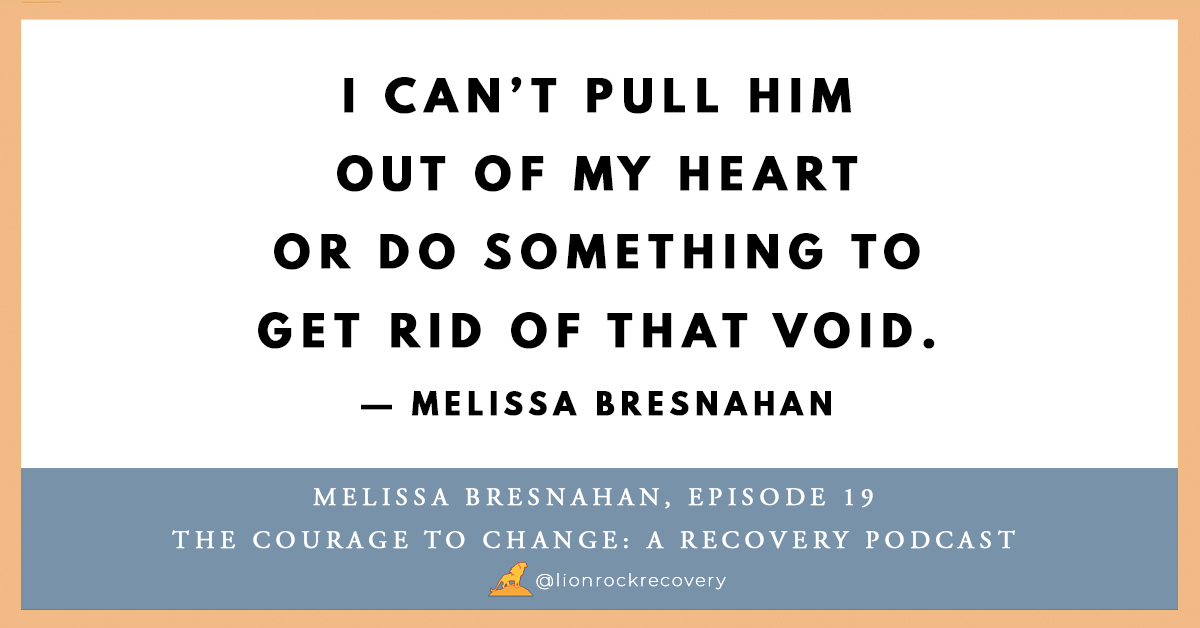