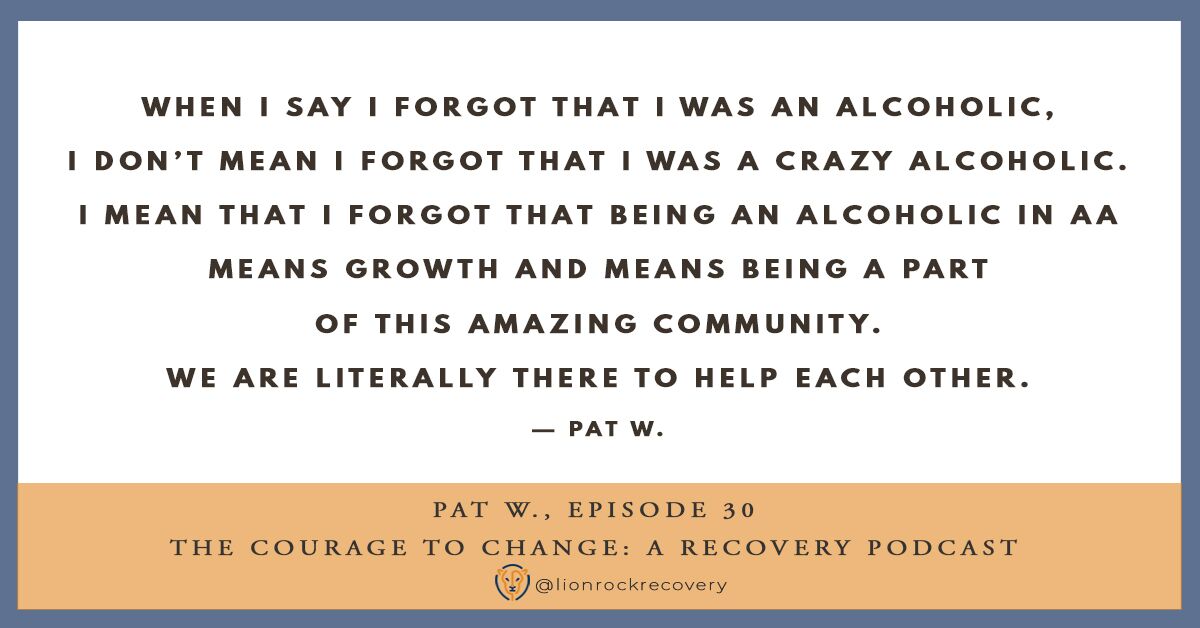 Pat W was born and raised in Pasadena, CA. He describes himself as a passionate cyclist, runner, photographer, and book nerd. Pat has Tourette syndrome (Tourette’s), which created many challenges for him as a teen and into adulthood, and is what largely contributed to his substance use. In Episode 30 of The Courage to Change: A Recovery Podcast, Pat shared his experience living and overcoming Tourette’s, having a near death experience and finding true purpose in recovery. We’ve edited and condensed Pat’s story for a fast read. You can listen to the entire interview here.

Pat shared that Tourette’s shows up in many different ways, “sometimes it’s a tick, sometimes it has nothing to do with saying or shouting things.” For him, “Tourette’s showed up in me in the way of a stutter.”

He shared that his parents have been married for 47 years. To this day, “they sit down at 5:30 every night and make cocktails and just talk about their day.” Pat added, “they’re as normal as normal can be.” That said, Pat had a difficult time growing up. He shared, “my family was wildly dysfunctional because I couldn’t talk.” He had a difficult time having conversations with others and “felt like the volume was turned up to 11” on his emotions.

Unable to “hold full conversations with people,” Pat started to develop anxiety at a young age. About the time he was in middle school, he asked his parents if he could switch schools. He shared, “Our communication broke down so terribly that I didn’t feel safe at home. I didn’t feel safe at school. I was getting bullied like crazy.”

His parents agreed to send him to the boarding school of his choice. He continued to have problems communicating with his peers and recalls not being able to find his “fellows.” From there, he transferred to a school for kids with learning disabilities, which he said, “was a savior.”

During this time he shared, “it essentially felt like the weight of the world was on my shoulders and I was trying to breathe through those little straws that you would stir coffee with that we all try to breathe through, it’s impossible, that’s what it felt like.” He started taking medication to cope with his syndrome, which only made things worse. Pat admitted that he “had an inability to process feelings just because talking was extraordinarily hard.” Pat recalls having allergic reactions to his medications. He said, “it would be a bonding experience for me and my dad when he would rub my back as I threw up.”

Miracuously, weed helped relieve his stutter and his Tourette’s started going away. When Pat was 18 years old, he fell in love with the first girl he ever dated. He had an opportunity to study photography in Greece. He put his relationship on hold so that he could go, but she ended things. He was devastated. That year, he began to drink excessively.

Getting Into an 18 Car Pile Up

After returning home from Greece, he and a friend took a road trip from Southern California to San Francisco. It started to hail “out of nowhere” and they “slammed into the back of a car going 60 miles an hour.” Then they got hit from behind and got in an 18 car pile up. As the incident took place, Pat recalls coming to terms with his addiction to alcohol and weed and decided, “if [he] made it out of the accident, [he] would do his best to stop.”

But while no one was injured from the crash, Pat did not stop using. He shared, “I kept getting loaded after that because I didn’t know how to not do that.” He became suicidal. I would kind of wake up in the morning and get super loaded to turn the volume down in my head and then within a few hours it would turn back up and then it would just be a game of what can I do today to convince myself not to kill myself.”

A couple years later, Pat called his friend who was in the car with him during the crash. He asked his friend for help who referred him to a new therapist. His friend said, “Well, there’s this woman who’s a therapist and she’s the only person that I’ve ever met who can help people through this that don’t want to go to treatment and don’t want to go to AA.” Pat started to see the therapist and has been working with her ever since. She also eased Pat into AA.

Pat got sober when he was 20 years old. After three years of being sober, Pat became suicidal again and relapsed. He shared, “I was giving the minimal amount of me to Alcoholics Anonymous.” Additionally he said, “my coping skills had not been rebuilt.” And one day, on a train north to Washington State, he was offered a drink and he took it. He shared, “in the moment I was offered whiskey and I forgot I was an alcoholic.”

On the train, he recalled having “that moment – where the entire narrative, from being a kid, everything came to [him] at once.” He was able to mentally turn down the voices in his head calling him to drink another glass of whiskey, and quit again on the train. When he arrived in Washington that night, he went to a meeting and got a new sponsor.

Pat knew, “the only way to not have that happen again was to really make it not 100% about [him] and make it as much about other people as humanly possible.” He also began to meditate as a way of calming his thoughts and anxiety.

Being a Victim of Sexual Assault

Through meditation, Pat recalled a memory that he had not associated with for nearly 17 years. He shared that he and his friend George had been victims of sexual assault. What Pat thought was a safe space, he shared, “we were just there and [an older man] held me down and he grabbed my private parts. I threw him off and I left.” He added, “I’ve always remembered that clearly, but the truth of it, the capital T truth was not associated with that until I was practicing meditation.”

Pat is 38 years old and works at a bookstore in West Hollywood. He shared, “I do my best to go to a meeting every single day.” In therapy, he talks about his assault as well as previous relationships and growing up with Tourette’s. He shared, “Integrating both methods of healing and growth, therapy and AA, have a tremendous effect on this.”

Pat is pursuing a masters in teaching with hopes to teach english to high school students. “I want to do these things that helped me recover and help me exist in this space of communal growth.” He added, “I don’t want to be on that train again. I don’t want to have those last few days again.” Pat has not used alcohol or drugs since that day on the train. He continues to seek growth spiritually and through therapy.

You can listen to the entire interview here. 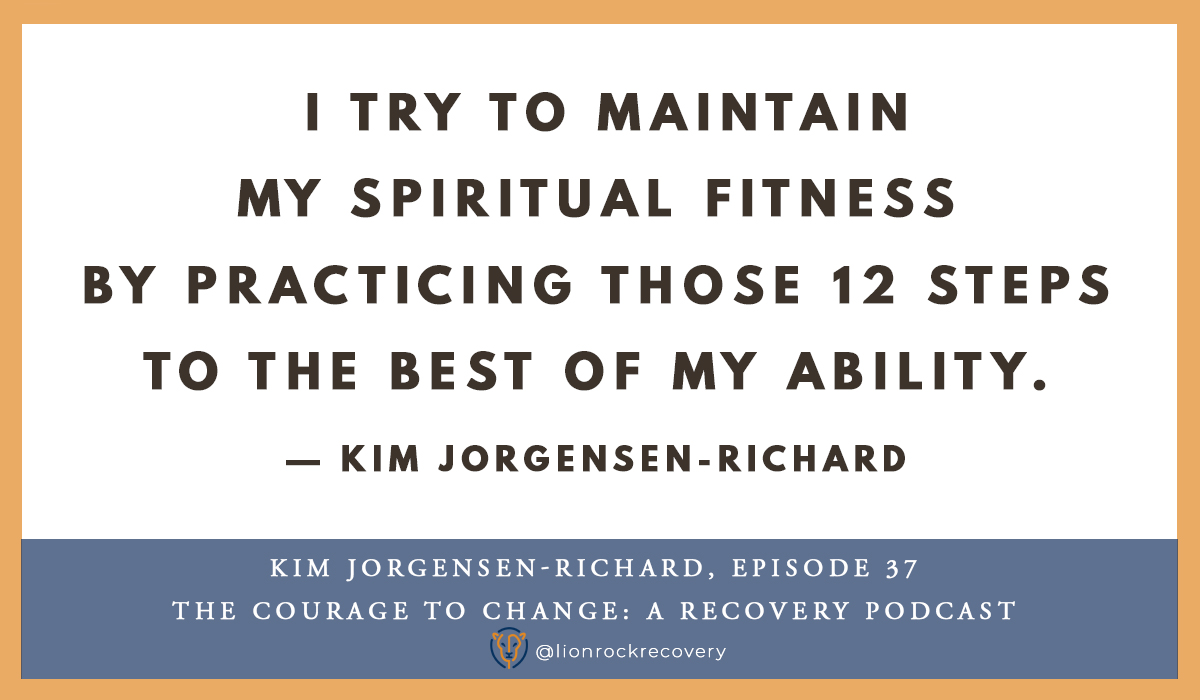 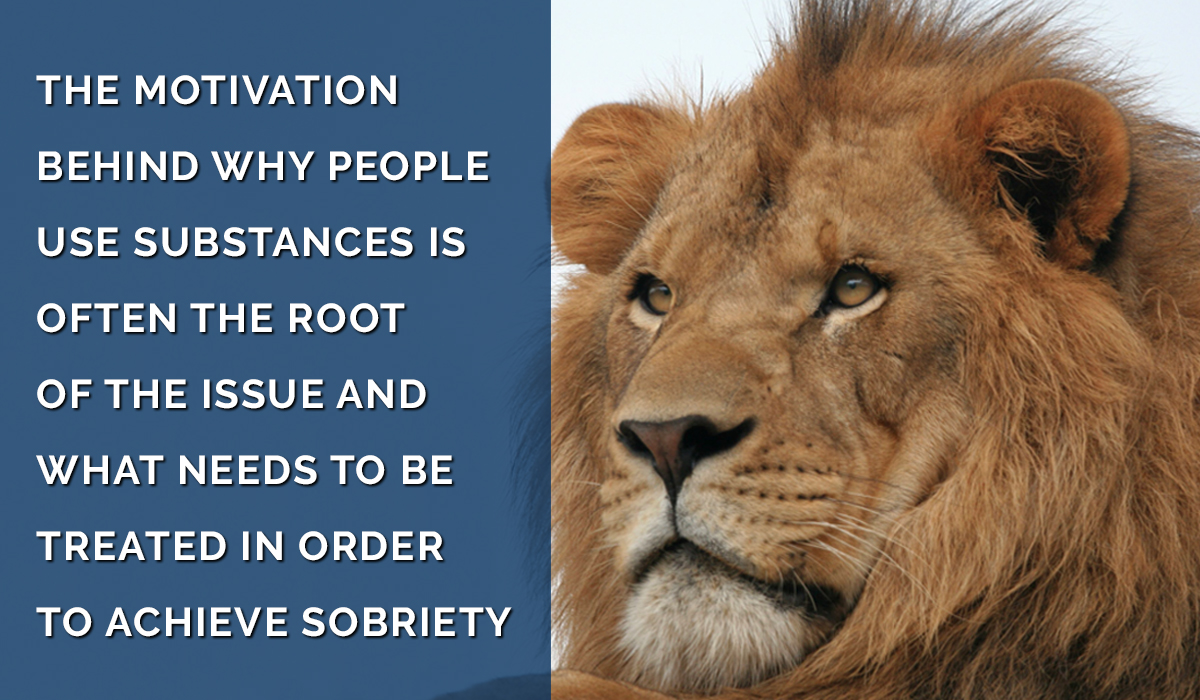