Lisa Kohn is Ashley Loeb Blassingame’s guest on Episode 23 of The Courage To Change: A Recovery Podcast. Lisa Kohn is the author of, To The Moon and Back: A Childhood Under The Influence. She also owns a leadership consulting and executive coaching firm, and spends much of her time speaking, writing, teaching and presenting her ideas and approaches to life and business.

We’ve edited and condensed her story for a fast read. You can listen to the entire interview here.

Born to hippie parents, Mimi and Danny, and raised in New York City’s East Village in the 1970s, Lisa’s early years were a mixture of encounter groups, primal screams, macrobiotic diets, communes, Indian ashrams, Jefferson Airplane concerts in Central Park, and watching naked actors on off-Broadway stages during the musical HAIR. By the time her older brother Robbie was 10 years old, Lisa’s father had him smoking pot. By the time Lisa was 10, Lisa’s mother had her pledging their lives to the Unification Church (the “Moonies”) and self-appointed Messiah, Reverend Sun Myung Moon.

By 11 years old, Lisa’s grandmother, her mom’s mother, was diagnosed with cancer. She, her mom, and Robbie moved to New Jersey with her grandparents. Her grandmother died, which sent her grandfather into a depression. He was a lawyer and a judge, and he stopped practicing his cases because he was so depressed. He could have gone to jail because of the cases he hadn’t practiced, but instead, the court admitted him to a psych ward. Shortly after Lisa’s grandmother died, Lisa’s mother left her children to go live and work for the church and Lisa and her brother moved to New York City to live with their dad, Danny.

According to Lisa, “the Unification Church is founded on the belief that all churches, all religions, all people should be unified under God.” In the podcast, Lisa shares her point of view with Ashley, that the difference between a cult and a religion is extremism. “It’s the us versus them. It’s the idea that, ‘we are the chosen ones, we are the saved ones, we have the truth, and everybody else is sinning and going to hell.’” Lisa described the dynamic in her church of the concept of indemnity, where you must suffer to pay for the sins of your ancestors and you suffer so that your descendants don’t have to.

After her mother left the family, Lisa moved in with her father who then lived in the East Village in New York City. Lisa shared, “To me, he was Satan. He was living Satan’s lifestyle, living a life of sex, drugs and squalor.” She shared, “the best seats I ever had at Madison Square Garden were at my mother’s wedding, because I was a Moonie, and the best cocaine I ever did was from my father’s friend, the judge.”

“The best seats I ever had at Madison Square Garden were at my mother’s wedding, because I was a Moonie, and the best cocaine I ever did was from my father’s friend, the judge.” (call out)

She and Robbie would spend weekdays with their father, Danny, and weekends, holidays and summers with their mother, Mimi, inside the church. Seeing her father’s lifestyle, and how much that terrified her, caused Lisa’s beliefs of the church to grow even stronger because to her it represented structure and safety.

During the summer between her junior and senior year of high school, Lisa’s father sent her to music camp, Lisa thinks to keep her away from the church. For the first time, she had friends who were gay and bisexual, but she knew that it was a huge sin in her church. She wrote to her mom, “What should I do? These are my friends and they’re wonderful.” Her mother responded, “You have two choices. You can convert them, or you can stay away from them because they’re evil.” This answer devastated Lisa.

At 17 years old, Lisa decided to pull away from her church. She became more involved in school, made new friends, found freedom from the rules and constrictions she’d grown up with, and found her first boyfriend. However, she still maintained a relationship with her mother, visiting her on weekends.

“So when I left the church, on top of all that, there was a decade of pain, anger, sadness for the times my mom wasn’t there and wouldn’t be there and wouldn’t come see us.” Someone pointed Lisa in the way of AlAnon during her senior year of college and she “crawled in.”

Lisa shared, “As I always say, when it’s all you know, it’s all you know. So truly, I knew my childhood was weird, but it wasn’t.” She adds, “In Al-Anon I would tell my story and people’s jaws would drop. You’re in this room of 100 people, and you tell your story and they all go, ‘Oh my God.’ … I didn’t know.”

Lisa shared, “My progress, recovery has changed and grown in so many ways, through so many processes and trauma work and all of that.” She added, “I have scars, but I am not my damage. I have damage, but that’s okay.”

Lisa married one of her best friends from high school, and together they have two children. While Lisa devotes much of her sobriety and healing to therapy, meditation and EMDR work, she shared, “I will surely say that I healed through loving my children.” 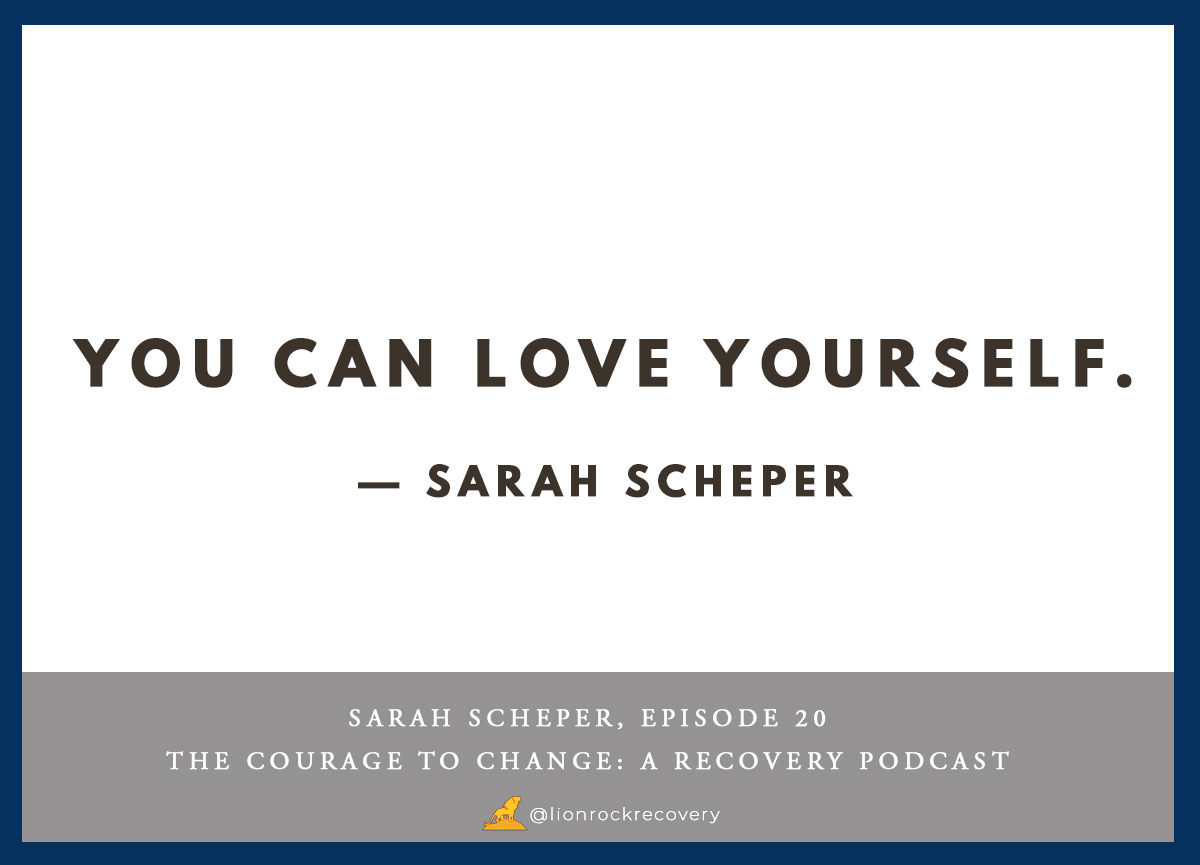 From the Podcast: Morgan Pagels: Heroin and Homelessness – The Aftermath of Growing Up in an Alcoholic Home