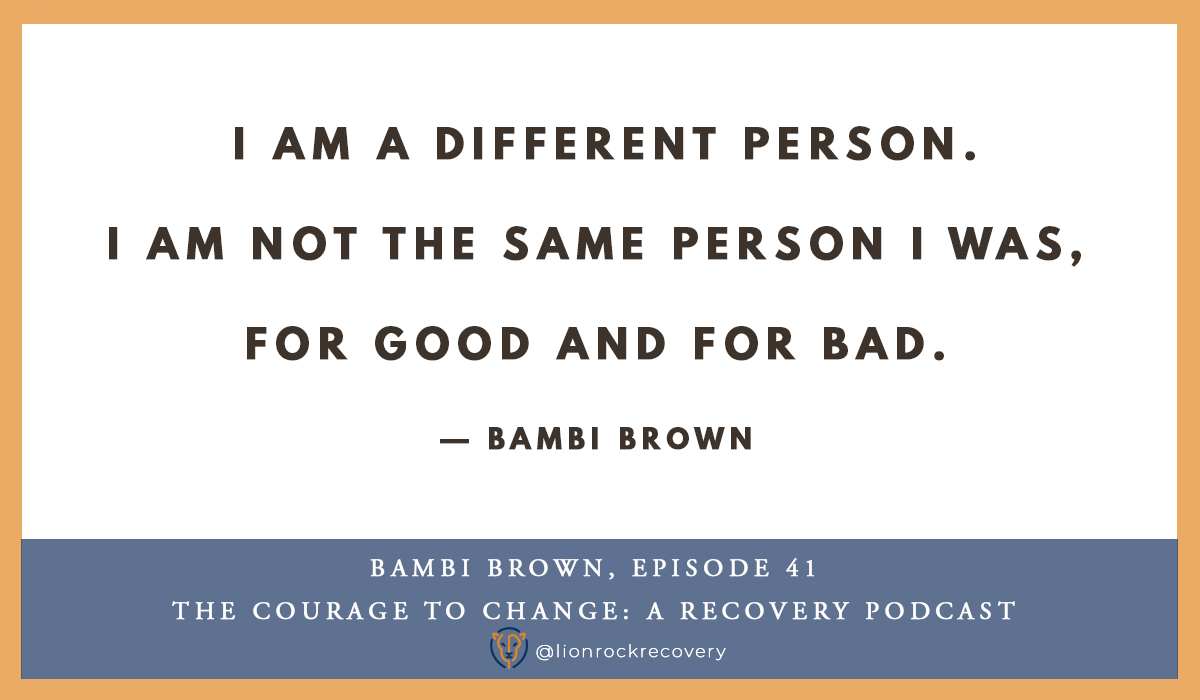 From the Podcast: Bambi Brown – Getting Sober at 26, Then Being Brought to Her Knees in Sobriety by Motherhood

Bambi Brown never imagined herself as an alcoholic or drug addict. Dependent on drugs and alcohol while in an abusive relationship, she realized she couldn’t stop. At the age of 18 she was introduced to what a sober life could be. After eight relapses, she became sober at the age of 26. She is now a nurse, married to her sober high school sweetheart, and the mother of two children. Her journey to motherhood plays a large part in staying sober but also introduced an emotional bottom in sobriety. Tune in to episode 41 to hear how Bambi overcame a rollercoaster first pregnancy and how sobriety has shaped who she is as a mother.

Bambi grew up in Hawaii but not the crystal clear water and white sand beaches you’d imagine. Although part-Hawaiian, Bambi’s blonde hair and German features automatically made her feel like an outsider in the rural, small town she grew up in.

Her mother said she came out of the womb with a “grimace.” She was a skeptic from the start and very untrustworthy of others. Facing bullying throughout her elementary and middle school years, she learned to rely on herself.

Her high school years were even harder to navigate, becoming depressed to the point where she’d make herself sick. She spent months bedridden by mononucleosis (mono) and once she overcame it, her distaste began to believe it was “okay to drink.”

Bambi had taken sips of alcohol throughout her early years of life. Sneaking alcohol and experimenting during her teenage years, she remembers downing a bottle of chardonnay at the age of 15. Although she got horribly sick and her friends were deeply concerned, it never registered that it might have been a problem.

By her senior year of high school, she was diagnosed with severe anxiety and depression. Mixing her medications with alcohol and using a lot of marijuana, her mental illnesses began to cripple her ability to handle the outside world.

At the age of 18, she got accepted into an art school in San Francisco so she left her small town and headed to California to live with family friends in Marin. Five months in, while her mother was visiting her and her Vicodin usage was getting out of control, it was clear she needed help. Her mother took her back to Hawaii but it wasn’t “rainbows and butterflies” when she got back.

Almost immediately after her return to Hawaii, Bambi met a 24 year old man who she quickly fell in love with. Within a week they moved in together and from there she uncovered a string of lies. He was actually 31, divorced, an alcoholic and incredibly manipulative. Bambi began profusely drinking as a means to cope with the constant fighting and abuse. It wasn’t until six years in and an engagement ring that she realized she needed to get out.

In her early 20s, Bambi’s father got ill and after various trips to the hospital, she had a realization that she wanted to be a nurse. She put herself through school, cut back her drinking to the weekends and graduated second in her class. She completed schooling with crippling depression and anxiety due to her home life. The second she passed her state exam, she got the courage to leave her fiancé.

After reconnecting with an ex-boyfriend, and her now husband, on the Internet, Bambi was reintroduced to what a sober life could be. Although she’d run to Alcoholics Anonymous and Narcotics Anonymous when her and her ex-fiance would briefly break up, she never took it seriously.

At the age of 26, Bambi attended a meeting where she raised her hand to share and for the first time felt truly surrounded by friends who supported her recovery. She connected with these people who also experienced traumas and emotions throughout their lives and finally she could see the light at the end of the tunnel.

At the year mark of sobriety, Bambi moved to Los Angeles with her now husband who was 5 years sober. The small town girl in a big city didn’t feel she entirely fit in and as she approached the two year mark going to 10 meetings a week, she began to hit a bottom. She needed to get out and that meant breaking up with her boyfriend and heading back to Hawaii, but that didn’t last long.

Continuing her seven to ten meetings a week, Bambi was ready to not only commit to sobriety but also her relationship. She was ready to go back to Los Angeles, be with the love of her life and work on staying sober.

At five years sober, Bambi got pregnant with her first son and quickly learned she had to be her own advocate. She was very sick during her pregnancy and felt quite alone with her husband working long hours and family all the way in Hawaii.

Once the baby was born, her anxiety was elevated as she wasn’t only responsible for her own life, but a newborn baby’s as well. Her son got very sick, and as a nurse, she was deeply concerned that doctors weren’t properly caring for him. She had an overwhelming fear that translated to postpartum anxiety, something that is not often talked about.

Trying to navigate her son’s health problems, she heavily leaned on her sponsor because life was overwhelming. The doctors weren’t listening to her and she had to read a lot on her own to understand her son’s severe allergies while dealing with her anxiety. Her sponsor was her rock in helping her stay sober through the stress. Today, Bambi and her husband homeschool their son due to his health problems and inability to fight off infections the way those without his problems can.

Although she said she’d never have another child, once she and her family moved back to Hawaii a few years after her son was born, she gave birth to her daughter. Her second pregnancy was much less stressful and she describes herself as a “completely different person” through the process. She felt powerful, in control and strong.

Bambi learned to trust her gut throughout her recovery process and throughout her journey of becoming a mother. Trusting her own intuition was never easy to navigate but now she is confident in herself and has learned to trust those around her after years of uncertainty. She trusted her gut on her ability to stay sober through hard times and get the help she needed for her son.

Today, Bambi lives in Hawaii with her two children and husband. She finds her peace at the beach and trusts her sobriety will always be an important part of being the best mother she can be. You can listen to her get real on motherhood and sobriety here.