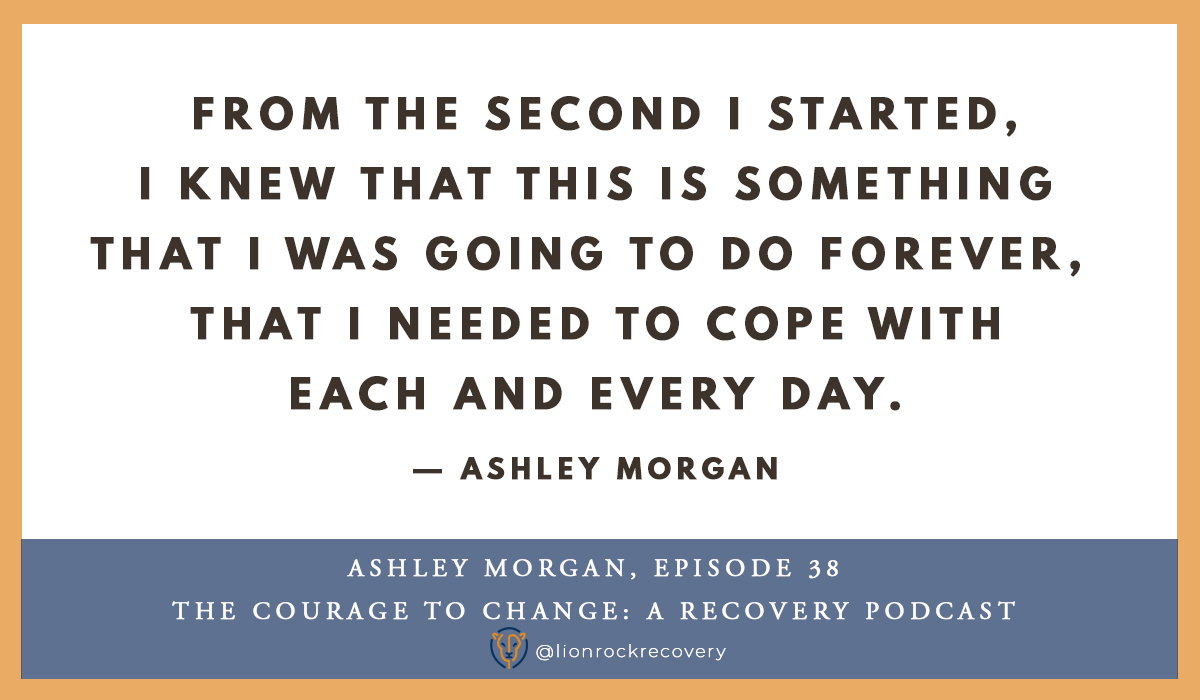 From the Podcast: Ashley Morgan – When Resources and Access Aren’t Enough, the Deep Desire for a Different Life Prevails

In Episode 38 of The Courage To Change: A Recovery Podcast, host Ashley Loeb Blassingame interviews Ashley Morgan, an interior designer in Los Angeles whose journey to recovery was tumultuous. Through 13 different treatment centers and hospitals, mending relationships with friends and family, and her perseverance, Ashley began to get honest with herself and worked to change her life. She wanted to live, and continues to live, a full sober life as a business owner with a wonderful support system that remains an integral part of her staying sober.

Growing up with a father in the military, Ashley’s father took on the stricter parental role. Emotions weren’t allowed in his household. On the opposite side of things, her mother wished for her daughters to be her best friends, oversharing things and treating them more like peers than taking on the parental role. She remembers seeing too much, too young in the care of her mother, which forced her to grow up quickly.

She now recognizes that her mother had her own addictions and mental health issues. When Ashley was seven years old her mother decided to start attending Alcoholics Anonymous meetings but returned to her old ways and stopped going when Ashley was ten.

Ashley’s family attended her aunt’s college graduation party in Oregon around the time Ashley was in sixth grade. After running around, she remembers being very thirsty and taking a giant drink of something that tasted disgusting; she knew soda was in there somewhere and continued to drink it. She had a really fun night but didn’t try anything else for a few more years.

In eighth grade year, she started a new school where she almost immediately got introduced to smoking marijuana. Within a week, she found “her people” and began using methamphetamine (speed). She also started getting into hallucinogens, but the speed pills were her lifeline. Once she started using, she knew it would be a part of her life forever and that it was something she would cope with every day.

Her mother’s behavior at home began to take a toll on Ashley, so she used the drugs and alcohol to drown out the constant bickering and chaos at home. When her mother couldn’t find it in her to parent Ashley, she would call the police. This became a recurring part of Ashley’s teenage years and the police officers eventually knew her by name.

When Ashley was 14 years old, her mother was dating a man who had also struggled with alcoholism and was in and out of their lives for a few years. During this time, Ashley was regularly skipping school but on a day she decided to attend class, she returned home to find her mother frantic. Her mother’s boyfriend had not left the room all day and her mother was concerned something was wrong because this was not normal for him. Because her mother was scared, she made Ashley enter the room to check on him.

He was cold and unresponsive from what was ruled a cocaine overdose. Ashley never fully processed this memory or the fact that she was the one that was forced to discover him. Ashley learned through her years of recovery that this was not what made her an alcoholic but was another piece of trauma that piled up in her life.

Ashley began skipping school, running away from home, and using regularly. After a big fight that ended in Ashley hitting her mother, Ashley was arrested for assault and battery. Her father immediately took her to a boarding school in Arizona that ended up fueling her addiction with partying. She remembers at one point a friend turning to her and saying, “Wow, you’re an alcoholic,” to which she replied, “Yeah, I know.”

From there she began to spiral out of control and convinced the boarding school that she needed to leave to get sober. She entered a treatment center in Orange, California but gave up on that quickly too. She started living with her grandparents in Pasadena, got a sponsor, and tried working through the steps. Although she tried, she eventually began to go through a pattern of getting sober and then relapsing for a few years.

At the age of 17, her mother’s friend took her in because Ashley’s mother’s house became toxic for Ashley trying to get sober. Life started to become less about the drugs and alcohol and more about trying to get better. She started going to Alcoholics Anonymous meetings regularly and had a boyfriend who was also sober.

As she approached a year sober, Ashley’s sister got into a car accident that was ruled as a suicide attempt. This was not her sister’s first suicide attempt and Ashley was determined to step it up to be there for her sister.

By stepping it up, that meant being alert and awake at every possible moment. Ashley used cocaine to do so. She turned 18, and although scared she would be thrown into a treatment center without her coping mechanism, Ashley found herself in an intense relapse where she was doing two eight-balls of cocaine a day alongside two liters of vodka.

Hanging on to life by a thread, Ashley attended a wilderness detox program in Utah. Nine months in, she attempted to run away but her father convinced her to stay by encouraging her to finish something in her life. She finished the program and was sent to Sober Living in Boulder. After another relapse, she entered her final treatment center in Santa Fe, New Mexico. Spending her 19th birthday in treatment, this center not only worked through her alcoholism and addiction, but intensely chipped away at the traumas in her life.

Although hesitant to live a sober life, hearing the words, “You’re going to die if you don’t get honest,” made her realize that this was the first time she didn’t want to die. She fully immersed herself into working all 12 steps in a row, start to finish.

Ashley went through several moments of sobriety that she describes as a “low” where she knew she needed to reroute her life or she’d end up using again. The 12 steps became an important part of her recovery that she continues to incorporate into her life today.

The more she got sober, the more she realized that her mother was not a healthy component of staying sober. Her mother is now in AA and heavy therapy. Their relationship has taken time and is constantly changing but they continue to stay in touch.

Because of her tendencies to draw back when it comes to emotions, it took some time to gain back trust with her father. He now calls for advice on raising his daughters with his new wife.

Getting honest was a major part of her recovery and through years of therapy, AA meetings, and building up the relationships around her, Ashley is now sober for 12 and a half years.